When filleting pelagic fish, the common practice is to collect all off-cuts such as heads, tails and backbones in one bin. This immediately reduces the quality of the off-cuts as they become contaminated with e.g. blood, enzymes and residues from the intestines. Consequently, the use and value become limited, which is why the off-cuts typically are sold for feed production. 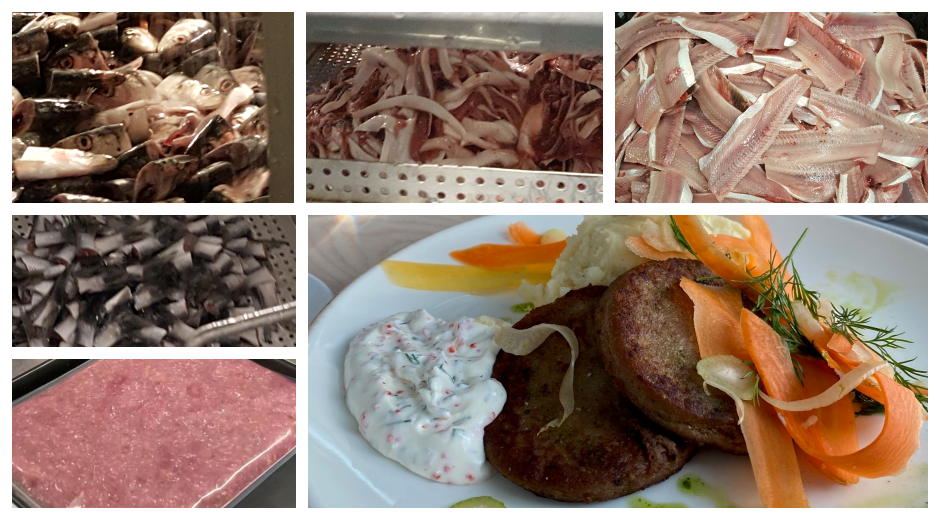 However, if handled correctly, there is great potential for using the off-cuts for more valuable purposes such as high-quality food ingredients for fish burgers as they are rich in proteins. This requires a change in the existing logistics – a challenge, which the partners in the EU-funded project WaSeaBi have taken up by developing a new sorting technology that makes it possible to separate herring into head, backbones, viscera + belly flap, tail in addition to the fillet.

The sorting technology has successfully been implemented at the herring processing company Sweden Pelagic AB in close cooperation with Chalmers University of Technology. And these new fractions can form the basis for development of new products at Sweden Pelagic, as well as at other fish producers.

“The sorting technology gives us a lot more possibilities to develop new healthy and tasty seafood. In the long run, we hope it will give us a better revenue,” says Martin Kuhlin, CEO of Sweden Pelagic AB, one of the industry partners.

"I think that it will give us great advantages in the future. The technology will make it possible to extend our product range. This year, we estimate that we will produce around 200 – 300 tons of ‘herring mince’, and the ambition is to increase that number every year.”

In addition to the possibility of developing new products, increasing the revenue and extending the product range, Martin Kuhlin also thinks that via the sorting technology they will be able to market their products towards new consumer groups.

"“In the first case, we will sell the products to the industrial customers, who manufacture pan-ready or eatready products. But we have experienced that also school kitchens and “public meal producers” have a great interest in the mince.”

Can also be applied to other fish species

The new sorting technology has been developed by re-building a filleting line for pelagic fish, which now fractionates and separates the fish into 5 different clean parts. This means that Sweden Pelagic AB now has 5 cuts instead of one, which they can sell for subsequent production of food raw materials and ingredients such as minces, protein isolates, hydrolysates and oils.

And the sorting technology can also be applied to other fish species, however, Martin Kuhlin points to a challenge in the fish industry:

“I really believe that we, in the fish industry, are way behind for example the meat industry. They have for a long time been very good at taking care of the whole animal in a much better way than ‘our’ industry.”

Ingrid Undeland, Professor of Food Science at the Department of Biology and Biological Engineering at Chalmers University of Technology, who has been working on the technology adds that

“It is of course important that the off-cuts are handled just as carefully as the main product i.e. the fillet, where focus is on preserving the quality throughout the whole value chain. Thus, instead of seeing the off-cuts as side-streams or by-products, which indicates that they are “leftovers”, they should be seen as just another cut of the fish - just like in the meat industry.”

The industry calls for new solutions

”We are currently being approached by companies in the fish industry who see a need to develop products other than the traditional fillet cut. We meet an industry that is ready for further innovation and sees a great potential in having the rest of the fish exploited into good, healthy food for the benefit of both consumers and companies. As a partner in an EU-funded project, we are very pleased that the results developed are of interest to Danish and international companies so that an even greater impact can be achieved from the project funds invested by implementing similar solutions in other companies."

In addition to the sorting technology, the partners in the project have developed new solutions for extending the shelf life of the off-cuts from cod and herring before they are used to develop new products. Here, there has been a particular focus on the use of rosemary extracts as antioxidants to prevent rancidity. It has proven to be very effective to dip the off-cuts in a solution containing e.g. rosemary extract.

WaSeaBi is a four-year project that started in May 2019, aiming to optimise the use of side streams from aquaculture, fisheries and the fishing industry by developing new methods for producing ingredients for the food industry. The project is led by a multidisciplinary team of 13 partners from Denmark, Sweden, Spain, France and Belgium respectively. The Danish participants are Royal Greenland, Jeka Fish, DTU and Food & Bio Cluster Denmark.

Facts about the fish processing industry

In the EU the fish processing industry is a significant industry that generates an overall turnover of nearly €28 billion and employs more than 122,000 people. However, the industry is facing several challenges. For instance, it is estimated that the amount of seafood side-streams in Europe is about 1.5 million tons based on a production of 5.1 million tons of fish caught. This means that the current utilization of the aquatic biomass is much too low. Up to 70 % of the aquatic resources end up as side-streams, which are either used for low-value purposes such as animal feed or disposed of, which is costly for the companies involved.

In addition, you can get more information about the project at  www.waseabi.eu or sign up for WaSeaBi's newsletter here. For more frequent updates, you can also follow the project on LinkedIn og Twitter.