In a former auto repair shop in the outskirts of Copenhagen a farm has found its unlikely grounds. Fresh coriander, pea sprouts and edible flowers are grown at the vertical farm – and sold to some of the finest restaurants in Denmark. 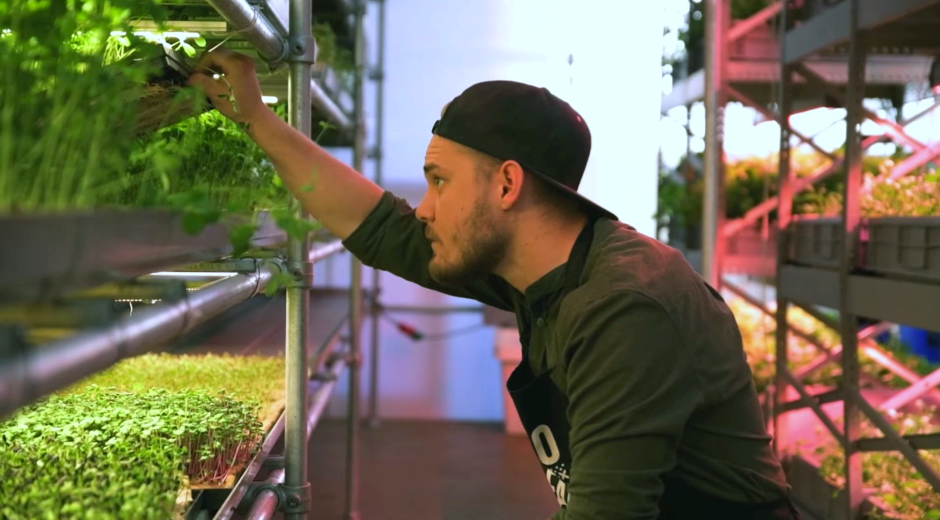 There is no soil at Nabo Farm. And the Sun never shines on the crops. Layer upon layer of sprouts are growing in the purple fluorescent light. Rocket sprouts, pea sprouts, coriander, red mustard, nasturtium and dill all thrive at the vertical farm specialized in micro greens – in the outskirts of Copenhagen.

For almost three years Nabo Farm has been a so-called vertical farm. Technology is at the core of the production. LED lights make sure that the plants get the perfect sunny day every day without ever seeing the sun. A hydroponic watering system makes soil superfluous and saves 90 per cent of water consumption at the same time. This technology combined makes it possible to grow multiple layers of crops. To create a farm in the middle of the city. And to save valuable farmland for other crops.

The name “Nabo Farm” can loosely be translated to “the farm next door”. And during the relatively short time Nabo Farm has existed the company has managed to get costumers such as Aamands and Denmark’s first and only two Michelin starred restaurant Alchemist. All products are grown specifically to order – and delivered by bicycle.

Cucumbers on the fourth floor

It all started with a home built watering system for a few vegetables grown on Jens Juul Krogshede’s fourth floor balcony. He was going away on holiday for a few weeks and didn’t want to see all his hard work amount to nothing.

“I had worked in the tech industry for many years and had burned out a bit. That’s when I started growing tomatoes and cucumbers on my balcony. When we had to go away for a few weeks – I build my own watering system in the living room. And that started all of this,” says Jens Juul Krogshede.

“One thing quickly led to another, and I learned about hydroponics – how to grow plants without soil. A core element of vertical farming. That took me to the next level – and I no longer had to carry big bags of soil up five flights of stairs,” he tells.

Hydroponics is a technique that dates back to the Hanging Gardens in Babylon, he adds.

At about this time Jens Juul Krogshede meets the soon to be co-founder of Nabo Farm, Sebastian Dragelykke, who was already working with developing the future of foods at a thinktank in Copenhagen.

“Together we saw the technology – the opportunity – and went with it,” says Jens Juul Krogshede.

Sustainability is the driving force

“There are more and more people on the planet who eat more and more food. With vertical farming we can create a fundamental change in the way we produce food. A great addition to traditional farming. With vertical farming we can produce food in old basements, inside old factories and on rooftops in the cities without causing further damage to the climate. This is something we have to do. In the long run we might even be able to take out traditional farmland to develop biodiversity,” says Jens Juul Krogshede.

“Nabo Farm helps to solve a different sustainability issue as well. In the food supply chain. The first year we existed we found out that many restaurants in Copenhagen have a demand for fresh coriander during the winter. At this time of the year, coriander must be imported from Spain or The Netherlands. By growing crops our way, we can supply local coriander all year round – and we deliver by bicycle – not by truck.”

Every day is a perfect summer day inside Nabo Farm thanks to the flourecent LED lights. The conditions are optimal for the micro greens.

It’s all possible because the LED technology has been going through a rapid development in the last couple of years. Where the lights used to be extremely expensive, the technology is now affordable.

“Not that many years ago, the only products you could grow this way with a profit were of a shadier kind. However, the rentability is still the main challenge for vertical farming, and a lot of vertical farms still struggle to make a profit. There are still many unknowns, and the technology is still developing rapidly,” says Jens Juul Krogshede.

Next step in Copenhagen

Vertical farming is a part of the future for food production. Therefore Food & Bio Cluster Denmark is now establishing a new network for vertical farming. Here the high tech farmers can meet, share knowledge, hear from industry experts and scholars. Nabo Farm is already a part of that network.

“Denmark is a farming country by tradition. We are great farmers. We also have a great tradition for knowledge and academia. If we can bring the two together, I believe Denmark can be an industry leading country in vertical farming. That’s why we’ve joined the new network,” says Jens Juul Krogshede.

As for Nabo Farm, the company has just received a new investment that will take the company to the next level and scale the business to turn it into a franchise that can thrive sustainably in other Northern European cities.