The small Danish start-up Casju started with support from our Future Food & Bioresource Innovation project. Now sour-sweet caramels made of the residual product from the production of cashews are on their way to the market. 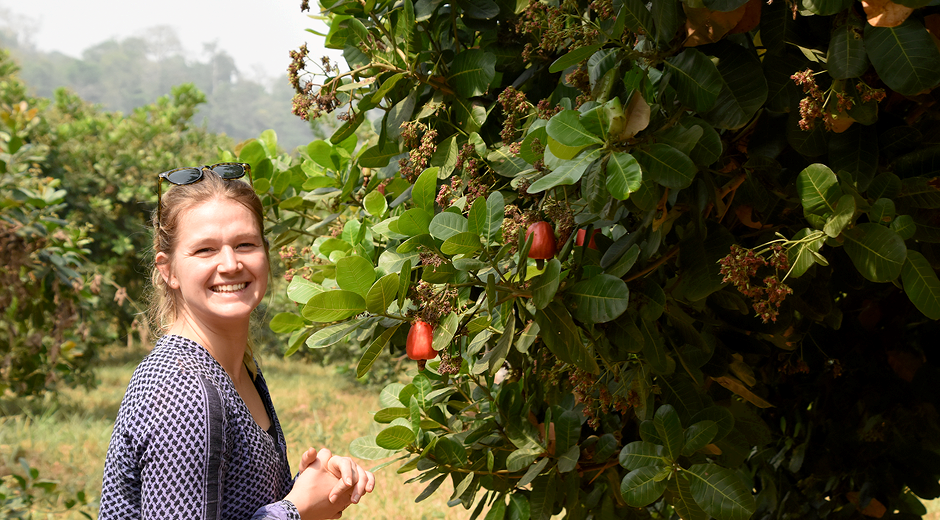 Every time you sink your teeth into a delicious cashew nut, a whole cashew fruit the size of an apple is thrown away. A sour-sweet fruit that can easily be used, but which has ended up as a residual product in the large nut production. In Africa alone, around 16 million tonnes of cashew fruit are thrown out every year.

Marianne Duijim and her thesis partner Camilla Daoust discovered this when they traveled to Tanzania in 2018 to write a thesis on the cashew nut value chain.

Here they saw how tons of excellent but quickly spoiled cashews ended up as waste. And they began developing ideas on how they could give the fruit a place in the value chain.

The two thesis students first tried making jam out of the cashew fruit. And a whole lot of other things. They differentiated to South America, where cashew nuts are also produced - and where the fruit is typically made into juice. At some point, they find out that there is a lot of pectin in the fruit that they will try to extract.

Pectin is a fiber that can be used as a natural, vegan starch. And it is roughly here, the small initiative becomes part of the project Future Food Innovation (today Future Food & Bioresource Innovation), where they receive financial support for the project - and are connected with the Danish Technological Institute for their experiments with the cashew fruit.

"Without that support and recognition, I don’t think we would have gotten started with Casju. Even though the company is only run by me now, and even though we no longer work with the pectin, we couldn’t have come here without Future Food Innovation. It has given us an understanding of working in the food industry - and a large network. It has certainly been crucial to where we are today,” says Marianne Duijim, who today has taken Casju in a completely different direction.

Caramels are the future

It turned out that the quality of the pectin wasn’t high enough to make it pay of to extract it in terms of sustainability. But Marianne didn’t give up. There had to be something the sweet fruit could be used for.

Several trials and experiments later have succeeded in developing a paste of the fruit. A paste that works really well in caramels.

In collaboration with the Danish company Social Foodies, she has started a production of handmade, vegan and sustainable caramels.

In the autumn of 2020, Casju ran crowdfunding through Coop's platform - and raised four times as many funds as she had hoped for.

“Now I'm just waiting for my new caramel machine to arrive so I can start producing on a larger scale. And then I am adapting the product to retail, and I hope I get it in the stores at, for example, Social Foodies and Irma,” says Marianne Duijim.

"After this, I would like to find other opportunities to use the paste, so I can create more sustainable products from the cashew fruit and develop this brand with, for example, ice cream and bars - and make this taste more commonly known," concludes Marianne Duijim.

She is already working on her next development project and has just started a new Coop crowdfunding campaign in collaboration with another start-up. You can read more at casju.dk

Future Food & Bioresource Innovation is run by Food & Bio Cluster Denmark and co-finances by Danish Board of Business Development and the EU.

Marianne's caramels give the cashew fruit a place in the value chain /Default.aspx?ID=11302&newsid=2872&Action=1&M=NewsV2&PID=70414 https://foodbiocluster.com/Files/Images/Medlemshistorier/getimageashx.png